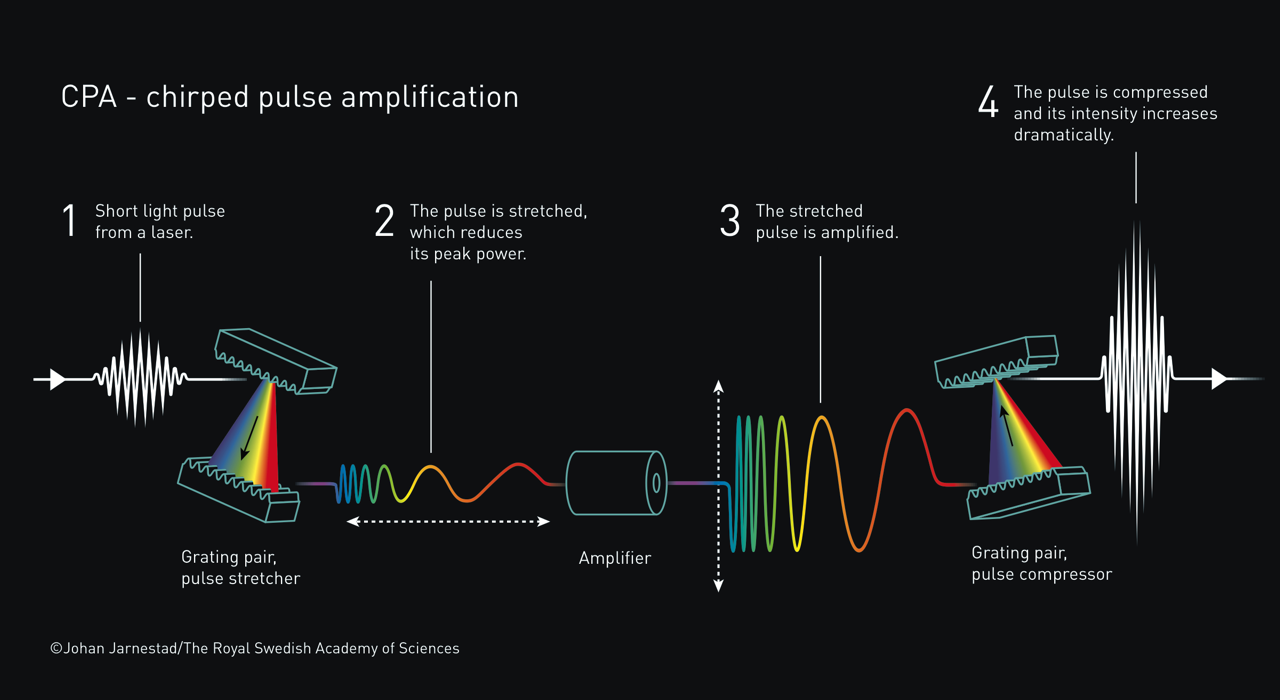 This year’s Nobel Prize in Physics was shared between Gérard Mourou (École Polytechnique, France), Donna Strickland (University of Waterloo, Canada) and Arthur Ashkin (Bell Laboratories, USA). The work of the first two winners, who were awarded half the prize, consisted of the invention of the Chirped Pulse Amplification (CPA) technique in the mid-1980s, which enabled increasing the power of ultrashort lasers to previously unattainable levels.

Thanks to their invention, ultrashort, ultraintense lasers have become ubiquitous, paving the way for applications ranging from dermatology to ophthalmology and from laser acceleration to pulsed X-ray generation and laboratory astrophysics.

IPFN congratulates the winners, whose work has been seminal to the development of high-intensity lasers and laser-plasma interaction, and celebrates their achievement. The award-winning Gérard Mourou is a long time collaborator of several members of IPFN’s Group for Lasers and Plasmas (GoLP).

Luís Silva, Nelson Lopes and Marta Fajardo worked together with Mourou on the genesis of the ELI Project – Extreme Light Infrastructure, started in 2005, with the goal of building in Europe the most powerful laser system in the world. Together with Mourou, they co-authored the ELI White Paper.

The researchers also led several work-packages of this Project, such as the International Communication (M. Fajardo) and the Secondary Sources (N. Lopes). In 2010, the decision was taken to coordinate the ELI Project in three poles, which have been set up in the Czech Republic, Hungary and Romania, which are now entering the operational phase. Marta Fajardo is part, with Gérard Mourou, of the International Commission of Scientific and Technical Advice of ELI.

Gonçalo Figueira, a specialist in the CPA technique, built and installed the first CPA laser in Portugal in 1998, having developed others since then. Luís Silva uses numerical methods to simulate the use of these lasers for particle acceleration and to exploit plasmas under extreme conditions. Marta Fajardo has expanded the CPA concept to the X-ray lasers domain, proposing and demonstrating the CPA-X technique using lasers in plasmas and free electron lasers.

The Laboratory for Intense Lasers and the VOXEL station are two experimental facilities run by GoLP/IPFN that makes extensive use of the CPA technique. At these labs, tens of young researchers have been trained and joined the ranks of science thanks to this extraordinary invention.

IPFN celebrates this very extraordinary recognition for lasers and laser-plasma interaction and hopes that it may inspire other young researchers to contribute to this fascinating area of physics.

Share:
GoLP researchers awarded with grant to explore plasma acceleration at CERN
L2I (and Marta F and Celso J) in the Spirou magazine